In today’s digital age every significant sports moment is tweeted, posted on Facebook and Youtube and replayed on highlight shows for days on end. Yet, there’s something sublime about capturing the essence of a moment in a photograph, especially in the pastoral game of baseball, whose golden years predated television and the digital camera. Classic baseball images immediately evoke specific memories or emotions in fans.

It’s not necessarily the greatest moments which produce the most iconic pictures and not every landmark achievement has a definitive photo associated with it. For example, while there are many great shots of Cal Ripken breaking Lou Gehrig’s streak, no quintessential photograph has emerged, though one may in time. Certain memorable play-by-play calls lack an instantly recognizable accompanying image, such as Bobby Thompson’s “shot heard round the world.” Sometimes a classic photo emerges from a fairly routine play.

This is my list of the 15 most iconic baseball photographs. 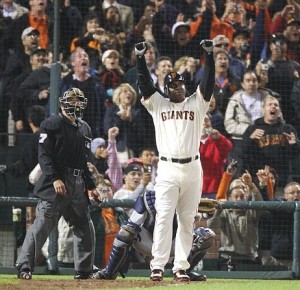 On August 7, 2007 at 8:51 pm PDT, Barry Bonds hit career home run 756 off of Mike Bacsik of the Washington Nationals. No photo is more representative of the steroid era and the confusion and anger it created among fans.

14) The Greatest of All-Time

On May 1, 1991, Rickey Henderson stole his 939 base to pass Lou Brock as the stolen base king and as he so eloquently put it become “the greatest of all-time.” He finished his career with a remarkable 1,406 stolen bases.

Curt Schilling beat the Yankees in Game 6 of the ALCS despite a torn tendon in his ankle sending the series to seventh game in what was an historic comeback by the Red Sox. Even though it occurred in the ALCS, Schilling’s bloody sock is the quintessential image of the Sox winning the World Series and ending their 86 year drought.

In the most discussed and debated play of Jackie Robinson’s illustrious career, the Dodgers second baseman stole home off of Whitey Ford in the 8th inning of Game 1 of the 1955 World Series. The Yankees held on to win the game 6-5, but the Dodgers came back to beat their crosstown rivals in the series for the first time. Fifty-six years later catcher Yogi Berra still swears that Robinson was out.

Kirik Gibson’s stunning pinch-hit blast off Dennis Eckersley in Game 1 of the 1988 World Series is best known for Jack Buck’s legendary call, though every baseball fan knows the image of a gimpy Gibson pumping his fist as he rounds first base. 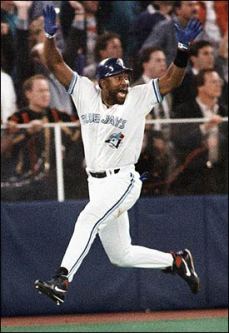 The Blue Jays were trailing the Phillies 6-5 in the bottom of the ninth inning with one out in Game 6 of the 1993 World Series, when Joe Carter hit a walk-off three-run home run off Mitch Williams to win the series. Carter joined Bill Mazeroski as the only players to end a world series with a home run.

Yankee hurler Don Larsen tossed a perfect game in Game 5 of the 1956 World Series against the Brooklyn Dodgers. No other pitcher has even thrown a no-hitter in the World Series. This classic photo shows Larsen’s catcher Yogi Berra jumping into his arms after the last out.

8)  The Ball goes through Buckner’s legs

People forget that the Mets had already come back from two runs down with two outs and nobody on in the bottom of the tenth inning in Game 6 of the 1986 World Series before the ball went through Buckner’s legs. Still, Buckner’s error on Mookie Wilson’s grounder was devastating more than any other player came to symbolize the Red Sox 86 years of futility.

Pete Rose had plenty of noteworthy moments in his career, from base hit 4,192 to bowling over Ray Fosse in the 1970 All-Star Game. Though no photograph is more representative of the career of the man known as Charlie Hustle than the above picture.

Perhaps no image better captures the passion and suspense that is post-season baseball than Carlton Fisk waving the ball fair in the bottom of the 12th inning in Game 6 of the 1975 series. The ball tucked in just to the right of the foul pole, over the Green Monster, sending the series to Game 7, where the Sox eventually lost to the Big Red Machine.

Considered by many to be the greatest play they’ve ever seen, Willie Mays’ catch at the Polo Grounds off the bat of Vic Wertz in Game 1 of the 1954 series between the Giants and Indians has become the enduring symbol of his greatness. The throw after the catch to keep the runner scoring was even more impressive.

There’s no greater testament to Joe DiMaggio’s record 56 game hitting streak than the fact that it still stands 70 years later. In fact, nobody has even come close to matching it. This shot of the Yankee Clipper breaking through the 56 banner has become the enduring image of his achievement. 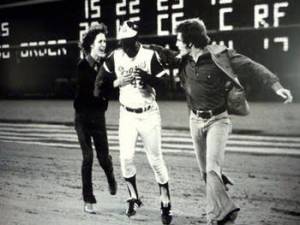 These fools are two of the most famous fans in sports and nobody even knows their names. Seriously, any shot of Hank Aaron circling the bases after breaking the most revered record in sports seems incomplete without them. Hammerin Hank’s historic 715th home run came off of Dodgers pitcher Al Downing on April 8, 1974. 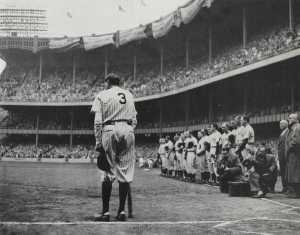 April 27, 1947, was Babe Ruth day at Yankee Stadium and throughout the country. His body ravaged by throat cancer, Ruth said goodbye to the house that he built. He died just over a year later. Ironically, this shot from behind of a weakened, hunched over Babe remains the lasting image of such an effervescent and powerful man.

1) The Luckiest Man on the Face of the Earth

The Iron Horse built a career on courage and grace, though it wasn’t until he was forced to walk away from the game that he showed us the true depth of his spirit. Gehrig stood before Yankee fans and the world knowing that at the age of 36 he faced certain death and declared “Today I consider myself the luckiest man on the face of the earth.”

34 thoughts on “15 Most Iconic Baseball Photographs”