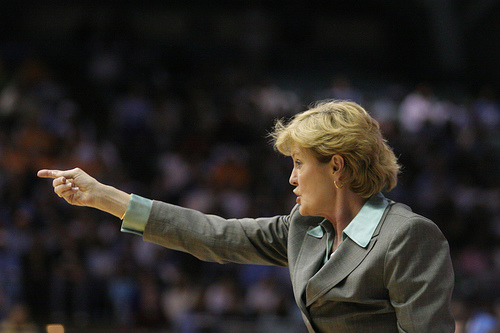 Pat Summitt climbed to the pinnacle of her profession and secured a legacy as one of the greatest coaches ever, in any sport, at any level, male or female. In 37 seasons as the coach of the Tennessee Lady Vols she’s amassed a Division I record 1,071 wins and eight National Championships.

Her career so embodies the meaning of her last name that years from now it will be fair to wonder which came first, the person or the word.

Now at the age of 59, Summitt faces a mountain steeper than any she’s climbed before. The Lady Vols coach announced on Tuesday that she’s been diagnosed with early-onset dementia, Alzheimer’s type, a devastating illness which leads to a gradual decline in cognitive abilities such as memory, intellect, rationality, social skills and normal emotional reactions, and is eventually fatal.

Summitt said she didn’t feel like herself at times last season and experienced a lack of confidence on the sideline – a foreign feeling for the decisive coach with a take charge attitude – so she underwent a series of tests at the Mayo Clinic in Rochester, Minnesota in May. She received her diagnosis in June.

Summitt’s coaching style has always been one of a tough disciplinarian, an in-your-face, feisty motivator who demands the best from her players. Since she revealed her diagnosis, several of her former players have spoken about how their coach instilled in them a belief that they can handle any situation. She taught them to dig down deep and find their inner strength in difficult times to be greater than they thought they could be.

Now the coach has to heed her own lessons.

She has plenty of life to live and hearts to touch. This illness provides her with an opportunity to introduce the wisdom she has preached to her players for 37 years to a much broader audience. Many athletes and coaches have experienced their finest hours while battling illness.

Lou Gehrig, one of the greatest baseball players to ever live, is best remembered for the courage and dignity he displayed in the face of death before a packed house at Yankee Stadium.

Magic Johnson won five NBA Championships, though I’m fairly certain he would say his greatest achievement has been living a healthy and fulfilling life for 20 years with HIV. He’s brought awareness to the disease and served as a role model for countless others who are suffering.

Former N.C. State basketball coach Jim Valvano brought tears to our eyes with his heart-wrenching speech at the 1993 ESPY’s. His body riddled with cancer, he inspired millions with his message of hope, and he lives on in the foundation for cancer research which bears his name.

Valvano famously said of cancer, “It cannot touch my mind. It cannot touch my heart. And it cannot touch my soul.” The difference with Summitt is that her disease is one of the mind. That poses a different set of challenges, especially for a woman so accustomed to being in control, though many of the same principles apply. By facing her illness with dignity and grace Summitt can inspire so many.

She stated that she intends to continue coaching and will attempt to keep her mind sharp through daily mental exercises, though she conceded that she’ll need to rely on her assistant coaches more than ever. Tennessee’s interim athletic director Joan Cronan has supported her decision. The coach sounded like her old self on Tuesday when she told the Knoxville News Sentinel, “There’s not going to be any pity party and I’ll make sure of that.”

She called a team meeting that afternoon to inform her players of her condition. Junior guard Taber Spani said the meeting was business-like, with Summitt calmly telling the Lady Vols that nothing would get in the way of their quest for a ninth national title this season.

”More than anything she just emphasized that she’s our coach and that she wanted us to have complete confidence in her, and we do,” Spani told the Associated Press.

Summitt’s son Tyler, a walk-on member of the Tennessee men’s basketball team, said his mother initially had difficulty accepting the news. He said, “And there was anger. “Why me?” was a question she asked more than once. But then, once she came to terms with it, she treated it like every other challenge she ever had, and is going to do everything she possibly can to keep her mind right and stay the coach.”

John Wooden, the only college basketball coach to win more championships than Summitt ( with 10) said, “Sports do not build character, they reveal it.” The same can be said of illness.

Pat Summitt’s character has been on display for the past 37 years. She’s a fighter, a teacher, a leader and a winner. Somehow, the Lady Vols coach will find a way to summit this mountain as she has so many others in her life and blaze a trail for others along the way. That’s what she does.

2 thoughts on “Another Mountain to Summitt”