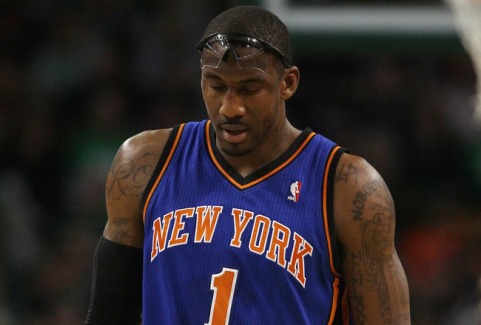 It’s been a wild twelve months for the New York Knicks.

They acquired Carmelo Anthony, let General Manager Donnie Walsh go, endured an extended lockout, cut Chauncey Billups, signed Tyson Chandler, began the season with an 8-15 record and ended the first half on an improbable winning streak fueled by a Linsanity which captured the imagination of basketball and non-basketball fans from New York to Beijing.

Throw in the signing of former all-star Baron Davis, the recent addition of streak-shooter J.R. Smith, speculation about Mike D’Antoni’s job security and questions about whether Amar’e Stoudemire and Carmelo can co-exist and somehow the most crucial story of the Knicks season has been almost completely overlooked by the media and fans.

Amar’e Stoudemire has lost his explosiveness.

The dynamic scorer the Knicks signed to a five year $100 million contract in the summer of 2010 can no longer jump.

Pick and rolls which once culminated in him throwing it down with authority now result in mini-hooks or push shots which over the past few weeks have been swatted back in his face with staggering regularity. He hasn’t had his legs underneath him when releasing the jump-shot from the elbow which had become such a potent weapon for him in recent years. STAT’s scoring and rebounding numbers, 17.5 and 8 per game are the lowest since his rookie season and his 44% field goal percentage is by far the lowest of his career.

It’s not just Stoudemire’s scoring prowess which has fallen off. His lateral quickness is significantly diminished as well. Never a great defender, he now hobbles after his man on pick and rolls like a washed up Penny Hardaway, unable to push off on his knees.

STAT’s apologists are quick to argue that his struggles are the result of a long layoff last summer due to a back injury and the extended lockout, as well as the emotional strain from the recent tragic death of his brother, but the signs are much more ominous.

Amar’e may have been behind schedule due to his back injury, but he was doing full workouts by the fall and has had two months since the start of the season to get his legs back. Dirk Nowitzki admittedly came into the season so out of shape that the Mavericks held him out of games for a week so he could work on his conditioning and he’s since reestablished his old form. The tragic death of Stoudemire’s brother occurred just a few weeks ago and doesn’t explain his lackluster performances before that.

Even more concerning is that Amar’e’s decline appears to be a trend which can be traced back to last season. The 6’10 forward’s stellar play during the first half-season of his Knicks career had him in the Most Valuable Player discussion. He was averaging 26.1 points and 8.6 rebounds per game at the all-star break and had the Knicks poised to make their first playoff appearance in seven years.

In the second half, his scoring and rebounding numbers dipped to 23.5 and 7.3 per game. Some writers attributed the decline to a reduction in opportunities due to the acquisition of Carmelo, but anybody who watched the Knicks regularly could see that he didn’t have the same spring in his step. Some nights it looked like there wasn’t any juice in his legs at all. In and of itself, the drop-off last season could be attributed to the abundance of minutes he played early in the season, but the trend has continued this year.

Stoudemire is only 29-years-old, typically still the prime of an NBA player’s career, though he joined the league straight out of high school and has already endured ten grueling NBA seasons during which he’s suffered major injuries. The microfracture surgery he underwent on his left knee in 2005 was so serious that the Knicks were unable to insure his $100 million contract. Many general managers around the league thought they were crazy for committing that much guaranteed money to a player with that kind of history.

The Knicks forward also suffered a detached retina during his tenure with the Phoenix Suns, which nearly ended his career and a back injury in the playoffs last year that was more serious than first believed. Knicks fans know from watching Larry Johnson how a back injury can rob a player of his explosiveness.

Amar’e can still be a solid contributor without the burst that once made him an all-star – 17.5 points and 8 rebounds isn’t too shabby – but if he is indeed on the downside of his career it would be a devastating blow to the Knicks. With so much of their cap space dedicated to Amar’e, Melo and Chandler over the next three seasons, they need all three of their maximum-salary players to perform at an all-star level if they’re going to compete for a championship.

Amar’e is still guaranteed $60 million after this season. That salary, combined with the lack of insurance on his contract render him virtually untradeable, even if he were to regain his old form.

The new Collective Bargaining Agreement threw the Knicks a lifeline in the form of the Amnesty Clause, which they could have used as insurance for Amar’e’s deal. While they wouldn’t have been able to recover the remaining money on his contract in the event that he were injured or his quality of play severely declined, they would have been able to clear his salary from the cap by releasing him. Instead, they went all in on Amar’e once again, using the clause on Billups (whose option they had picked up just six months earlier) in order to free up cap space to sign Chandler.

So why has Amar’e’s downturn received minimal coverage by the local and national media? In part, it’s been overshadowed by Carmelo’s struggles, the Chandler acquisition and of course, Linsanity. For national journalists and sportscasters who don’t watch the Knicks on a regular basis, it’s easy to attribute Amar’e’s struggles to an inability to co-exist with Carmelo or to what has been a strange, compressed, lockout-shortened season.

Another reason Amar’e’s slide has been overlooked in New York specifically is that the media and fans simply don’t want to believe that STAT’s skills may be declining. Amar’e came to the Knicks when no other superstar would and embraced the challenges of playing in the Garden, breathing life into a dormant franchise and re-invigorating a fan base that was starving for quality basketball. New Yorkers also recognize that if he hadn’t come to NYC, Melo and Chandler never would have either. They desperately want him to succeed.

Ultimately, there’s only one person who knows what’s wrong with Amar’e and that’s Amar’e himself. Last week, he told Alan Hahn of MSG Network, one of the few reporters who have discussed the issue of Amar’e’s explosiveness both publicly and with the Knicks forward, that he’s still getting his legs back and is almost there.

The Knicks and their fans better hope he’s right. If Amar’e can’t soar above the rim, the Knicks championship aspirations will be grounded with him.

2 thoughts on “The Elephant in the Knicks Locker Room”